The team has demonstrated an elastic binder based silicon anode exhibiting over 1000 mAh/g specific capacity and less than 20% degradation after 200 cycles. A battery using this binder technology is anticipated to have an over 30% increase in energy density, to > 300 Wh/kg. Also, adopting this technology is anticipated to replace the existing expensive nano-structural Si with low cost micro-particle Si, thereby driving the material cost down by over 50% per anode hence 10% per battery pack.

Owing to its high energy density per weight, the increasing usage of LIBs in the electric vehicles (EVs) and consumer electronics are driving the market demand. The global production of batteries for EVs has been steadily doubling every year since 2010. By 2020, EV batteries are anticipated to constitute 65% of the overall share of LIBs, surpassing consumer electronics and becoming the largest application segment.

The performance and cost of batteries for EVs is directly linked with their market adoption. Multiple U.S. Departments, including DOE, are pushing to increase the LIB battery efficiency and decrease the per kilowatt hour cost. The current target is to push the cost below $200/kWh, and achieve a goal of $125/kWh by 2022.

With the increasing requirement of applications such as Electrical Vehicles (EVs) and Hybrid Electrical Vehicles (HEVs), it is urgent to develop new materials which have higher energy density. One route to increase the LIB energy density is the use of silicon-based anodes, which have a significant higher theoretical capacity (4,200 mAh/g) than conventional graphite anodes (372 mAh/g). With Si anodes, specific energies greater than 300 Wh/kg become possible. However, the large volumetric expansion of Si during cycling presents an obstacle to Si-based anodes achieving such high energy densities.

In this project, the University of Akron worked with collaborators from The Ohio State University, University of Toledo and Ohio local companies pH Matter LLC and Akron Polymer Systems to develop silicon anode for high energy density LIBs.

This technology is scalable for industrial production, not only because of its simplicity, but also it is compatible with current battery electrode coating processes. A start-up company, Akron PolyEnergy Inc., has been formed to commercialize the binder materials.

As such, if the battery performance targets can be achieved, Akron PolyEnergy Inc. is in a strong position to push the commercialization of this technology. Initial sales and future purchasing commitments can be used to further finance large-scale production equipment. Akron PolyEnergy Inc. plans to manufacture the binder polymers, silicon anode composite as well as prototype batteries. Akron PolyEnergy Inc. will work with established battery manufacturers to introduce the binder into their pre-existing product lines and allow them to bear the marketing risk. The silicon anode based LIBs with the novel polymer binder will be sold to system integrators who will incorporate them into three main markets: automotive systems, consumer electronics and aerospace/defense applications. 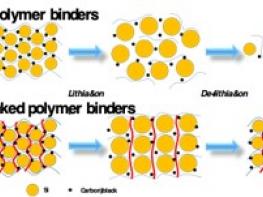 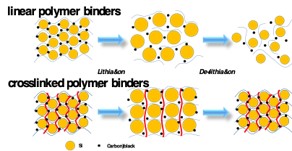