Electrooptic (EO) crystals, in particular lithium niobate (LN),are critically important for high-speed optical modulation. They are used in applications such as high data-rate optical fiber communications and high frequency receivers. Achieving the high modulation rates needed for fifth/sixth generation technology standards for broadband cellular networks (5G/6G) and defense applications is challenging. As a result, commercial modulators only reach modulation rates on the order of 40 GHz. With the ever increasing need to transmit data at higher rates and for defense receivers to operate at higher frequencies, research has intensified to find new methods of exploiting EO crystals for optical modulation at millimeter-wave (mmW) frequencies (30 GHz to 300 GHz). The proposed work will eventually lead to optical modulators that operate up to 100 GHz at low drive-voltages needed for industrial and defense applications. Developing this knowhow and establishing domestic supplier will ensure high-technology jobs in Ohio and mitigate dependence on China-based suppliers.

The following sub-sections describe the scope of the propose effort that will be conducted by The Ohio State University (Ohio State) and the University of Dayton (UD). Our industrial partner, Gooch & House go Ohio (G&H), will be providing technical and market guidance to the university team.

We propose to build and characterize an optical modulator that will eventually lead to operation at low drive voltages out to 100 GHz. Guided by electromagnetic (EM) design principles and state-of-the-art simulation software, the Ohio State team will perform the necessary fabrication processes to form and detach thin films from highly polished bulk lithium niobate wafers. The thin-film lithium niobate (TFLN) will rest on a thin layer of silicon dioxide (SiO2) deposited on a silicon wafer. Lithographic techniques will be applied to pattern narrow lines on the surface of the TFLN on insulator (LNOI). Etching will be performed to form a small rib on the surface of the LN to provide optical guiding. Gold electrodes will be formed adjacent to the waveguide rib. Characterization measurements will be performed to measure voltage response at direct current, 10 GHz, and 40 GHz with a longer-term goal of 100 GHz. We also plan to investigate the possibility of applying the thin-film approach to other EO crystals that could potentially provide even better performing modulators than those made from LN. 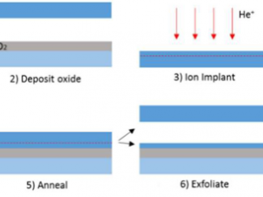 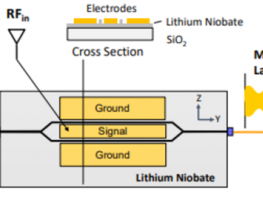